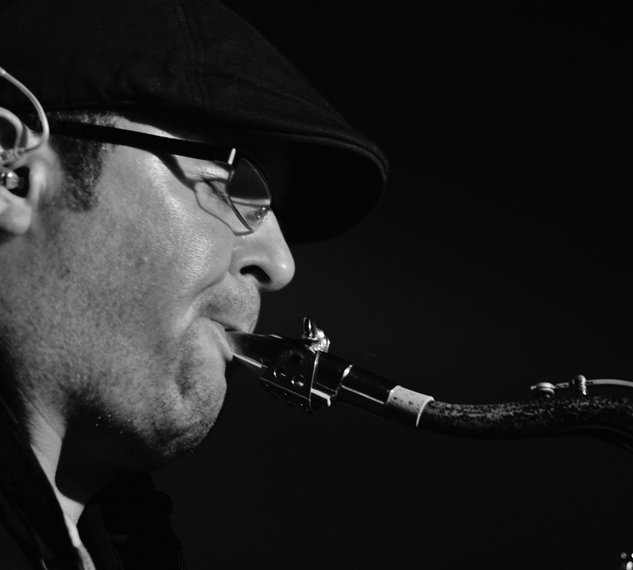 Technically, Chris Aldridge and Beebe are both making their debut appearance, but only in the sense that David Bowie and Ziggy Stardust might be said to be performing together, for Aldridge and Beebe are one and the same man. His assumption of an alter-ego seems more about a need to manage his prolific output than a desire to act out an alien fantasy. The two names do represent different facets of his musical personality. Indeed, over his career, he has done more than the work of two men under those names. In broad terms, it’s his birth name that Aldridge uses for his more traditional jazz playing, a bebop style evident on his own albums. It’s as Beebe that he gives free rein to his quirkier tendencies, interspersing his sax solos with flute and beatboxing, and it’s in this guise that he’s performed not just with jazz-funk groups such as US3 but also 1980’s pop-rave outfit Bizarre Inc.

Every now and then a band comes along that genuinely excite. Chris Aldridge with his band Beebe are just such an outfit. Chris's crew are the cream of the crop of the Midlands scene. They are a band more than equal to the sum of their stellar parts. In any other field of music than jazz they would be regarded as a stadium filling super group. They deserve national recognition.

Beebe is regarded as one of the UK’s finest saxophonists and possesses a wide ranging technique which ranges from beat boxing while playing flute, to playing two saxophones at the same time. His wide-ranging abilities have taken him on tours with Gary Barlow, US3, Ben E King, Gary US Bonds, Roy Wood, Geno Washington, Jaki Graham, Marti Pellow as well as appearances with UK, American and Asian jazz icons such as Pee Wee Ellis, Bud Shank, Gerard Presencer, John Dankworth, Victor Mendoza.

He has appeared on a number of sell out tours throughout Europe and is featured on the No 1 single These Days by Jess Glynne, Macklemore, Dan Caplin and Rudimental.

Beebe was featured on the DJ Spoony show on Radio One for three days in October 2005, where he taught him saxophone live on air ready for a Craig David concert. He has recorded on albums with Bizarre Inc, Mother, The Christians and Gold Blade and performed on support tours with Rancid, Edwin Starr and Blue. He has also appeared at Reading Rock Festival, London Jazz Festival and Montreux Jazz Festival.

In addition to having airplay on Jazz FM and the Paul Jones blues show, one of Beebe's saxophone solos was included in the Montreux Jazz Festival compilation CD in 1999.   Beebe released his debut album in 1997 throughout the Middle East and Europe. Reviews have compared his saxophone expertise to Grover Washington and earned him a prestigious endorsement from Keilwerth saxophones. He also performed on the soundtrack to the film Intimate With A Stranger which was premiered at Cannes Film Festival.

Beebe quintet were the winners of the Birmingham Jazz Rush Hour Blues Poll Winners award for 2010. He is also featured on Alexander Shulgin's triple album Tryptych. Beebe is featured on CD 1. Other artists appearing on this album include Billy Cobham, Bob Mintzer, Bob James, Gary Husband and Martin Taylor.

September 2019 sees the release of his sixth studio album, details to be added soon.

Beebe Has Worked With

Chairmen Of The Board

Angelo Starr and The Team